The west coast of Scotland has always had a close and often adoring relationship with Americana culture, particularly the imagery and music of classic rock ‘n’ roll and country and western. From Roy Rodgers and Trigger staying at Glasgow’s Central Hotel and the legend of Elvis landing at Prestwick Airport, through legendary nights at The Grand Ole Opry, Rock Garden and Blackfriars, and with generations dressed in clothes from Flip, the fascination with these two strands of US culture endure, with arguably no one capturing the love affair better than John Byrne with his classic TV shows Tutti Frutti and Your Cheatin’ Heart.

The current Scottish music scene, and Glasgow’s in particular, suggests this rockabilly romance shows no sign of slowing down any time soon, and Holy Smokes Records are central to the best of what is going on. Recent releases have included excellent albums and EPs from The Strange Blue Dreams, Les Johnson & Me, Awkward Family Portraits and Harry And The Hendersons, each one worthy of your attention.

Their latest release is Hugh Kearns‘ EP Inside Looking Out, and it’s an honour to be 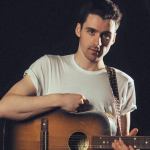 able to premiere it here at Scots Whay Hae!. There’s country, rock ‘n’ roll, bluegrass and blues in evidence, at times reminiscent of Townes Van Zandt, John Prine and Richard Buckner, at others going further back to Jerry Lee Lewis and Carl Perkins, Kearns’ (right) music is rooted in a tradition which is immediately recognisable yet he makes everything sound brand new.

The tracks include ‘Inside Looking Out’, ‘Cargo Run Blues’, and the brilliantly titled ‘Trusty Buck Arlington’s Lone Start Review’. But, exclusively for readers of SWH!, this is ‘Festival Tent’: