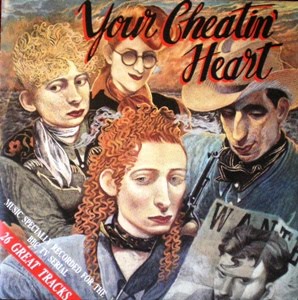 I finally managed to track down a personal Holy Grail; a copy of John Byrne’s Your Cheatin’ Heart. This was Byrne’s follow up to the recently released on DVD Tutti Frutti which I looked at last year (see A slight bruising of the crotch) and, apart from a dissatisfying final twenty minutes where the drama just seems to peter out, it is the match of its more famous predecessor.

Using country music as Tutti Frutti used Rock n’ Roll, Your Cheatin‘ Heart is centered around one of those areas of Scottish life that most people are only slightly aware of, perhaps through references to Govan’s famous ‘Grand Ole Opry’ or an uncle’s obsession with Patsy Cline. It is the perfect place for Byrne’s surrealist sensibilities as it is a setting that is not only out of time, but also out of place. Familiar enough to draw the audience in, yet odd enough to throw them out of their comfort zone. It also allows for a terrific soundtrack.

The cast is once more spot on, and includes Katy Murphy, Barbara Rafferty, a young Peter Mullan, Tom Watson (who has six different roles), Jennie McCrindle, Maggie Bell, Helen Atkinson Wood, Richard Jobson and an even younger Daniella Nardini. Special mention must go to Freddie Boardley’s Hell’s Angel leader ‘Toad’, whose Doric Scots is almost undecipherable, although once you manage to work it out you realise it’s as clever as you would expect from the pen of Byrne.

But there are four performances that I want to concentrate on specifically. The first is the most unexpected. Eddi Reader plays Jolene Jowett, one half of the singing duo ‘The McPhail Sisters’, and she is a revelation. With her statuesque flame red quiff and angular stance she is a John Byrne drawing come to life, and delivers Byrne’s dialogue as if it is second nature. It is the perfect role for her and she steals every scene she’s in.

The ‘romantic’ central pairing are John Gordon Sinclair’s ‘Diner Tec’ style food journalist Frank McClusky and Tilda Swinton’s Cissie Crouch. I remember at the time thinking that Sinclair was no match for Swinton on screen, but I now realise that was the point. Imagine ‘Gregory’ grown up and you get a sense of his performance; a confused adolescent at heart. Where Frank McClusky is defined by his love struck willingness to do anything for Cissie, Swinton gives Cissie a tangible sense of guilt and sorrow. Frank just wants Cissie to notice him, but Cissie has far more pressing concerns on her mind.

The most physical performance comes from Ken Stott as the borderline psychopathic Fraser Boyle, a fishmonger who sells Grade A drugs with his Arbroath smokies. Boyle is a man who thinks nothing of breaking a guy’s face for taking ‘The King’s’ name in vain (that’s Elvis, not Jesus), or simply attempting to croon anything from the ‘Sun’ catalogue. It’s a hell of a thing to stand out in this company but Stott does so with ease.

Byrne’s love for the music, and the people who also love the music, is clear. Anyone thinking that this portrayal of the country and western scene is anything other than affectionate is mistaken. The appearance of country legend Guy Mitchell as ‘Jim Bob O’ May’, as well as using the vocal talents of Reader and Maggie Bell, gives credence to the music and to the lives and loves as portrayed on screen. At the end of the day it’s not about the hat and boots, although they are important, it’s all about the tunes.

As usual with Byrne the real joy lies not in the drama but in the script. In John Byrne Scotland has one of the most talented dramatists around. His mastery of language is apparently effortless, and I can’t think of another Scot who brings such humour and lyricism to Scots’ dialect. Put simply, he writes as you wish you spoke. It is all too typical that he hasn’t been given more opportunity to show his work either on TV or in cinemas. But when you consider how Your Cheatin‘ Heart, and Tutti Frutti for that matter, were treated by the BBC then you could forgive him for downing tools and giving up. Some people are so good that they can get taken for granted. If ever there was an example of a prophet who was, and still is, not recognized in his own land, at least by those who could change matters for the better, it is John Byrne.