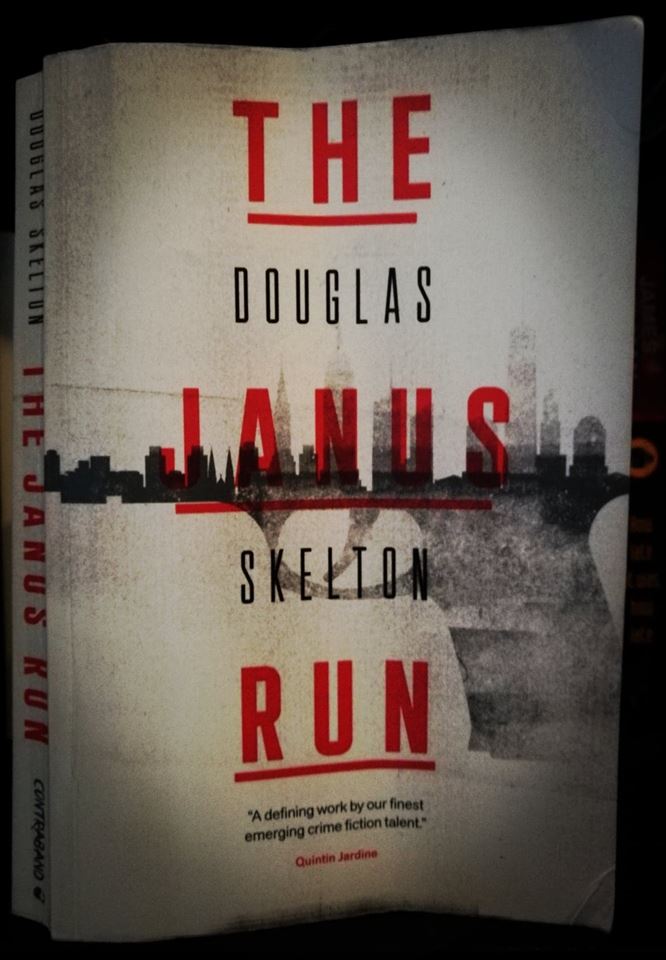 As regulars to SWH! will know, crime-writer Douglas Skelton is one of our favourite novelists. He has been a guest on our podcast, and his most recent novels, 2016’s The Dead Don’t Boogie & 2017’s Tag – You’re Dead both featured in their particular years’ ‘Best Of’ roundups. They were taken from his series of Dominic Queste novels, which feature a Glasgow gumshoe obsessed with film, noir, and film noir. Skelton has Queste speaking and acting as if he roams the streets of Brooklyn rather than Barlanark, so it makes complete sense that he has chosen to set his latest, The Janus Run, (a departure from the Queste books), in New York. This move makes for his most exciting novel yet.

Please don’t get me wrong, I am a huge Dominic Queste fan, and I hope we hear more from him before too long, but The Janus Run is a proper page-turner thriller, pure and simple – enthralling from start to finish. It feels as if this Atlantic crossing has freed Skelton as a writer. Instead of having characters pretending to be in the movies, this time they are in them. It’s as if he has brought all of his influences to bear – the novels, the films, and the TV shows which he loves are still in evidence, but without the direct references which, while great fun, always felt more than a little knowing. This time round Skelton shows rather than tells.

There’s police procedure and patterns of speech reminiscent of those found in Ed McBain’s 87th Precinct novels or TV series such as NYPD Blue, a nod to the mob movies of Scorsese and The Sopranos, government conspiracies with echoes of the Bourne films or No Way Out, and bloody shootouts which would make Tarantino blush. If you’re like me you’ll enjoy casting a fantasy (but, in a perfect world, surely inevitable) film version; a top-of-his-game Robert De Niro and Bradley Cooper are two names which I can’t shake. I’ll let you decide on which roles they would take on. With enough twists and turns to give you Vertigo (and yes, there is definitely some Hitchcock in there as well), you’ll be wondering what’s going on, and who has done what (and, indeed, who is who), before you realise you’ve just been told the answer. It’s a novel which guards its secrets well.

It begins with two words, “Dagda awakens”. And most of the novel deals with the result of that resurrection. As you might expect from the title, there are double-lives and double-crosses, as well as pseudonyms, psychopaths, secrets, and lies. A suspicious and troubling death results in people returning to lives they thought they had left behind, resulting in unlikely alliances and suspicion reigning supreme. No one trusts anyone completely, and as such it is terrific fun to read. As you do you can’t escape the feeling The Janus Run was a real labour of love for Skelton – that perhaps this is what he’s been wanting to write all along and he is grabbing the opportunity with both hands.

Most depictions of the Roman god Janus have two faces, representing looking to the future while simultaneously looking at the past. After the Dominic Queste novels, (and trying hard not to labour the point), The Janus Run shows us another side to Douglas Skelton, one where, while not exactly being deadly serious, (although it’s definitely deadly) he reigns in the pop culture references and the Spillane-like one-liners and lets his characters just be who they are, even if who they are are cold-blooded and highly-trained killers. To call it gripping is understatement writ large. But perhaps all you need to know is this – while reading it on the train I missed my station, completely absorbed by what was unfolding, which is the first time that has happened. Risk going further than you mean to and get your hands on The Janus Run because Douglas Skelton has written a thriller truly worthy of the name.

The Janus Run is published by Contraband Books, the crime imprint of Saraband.

2 thoughts on “Begin Again: A Review Of Douglas Skelton’s The Janus Run…” Leave a comment ›