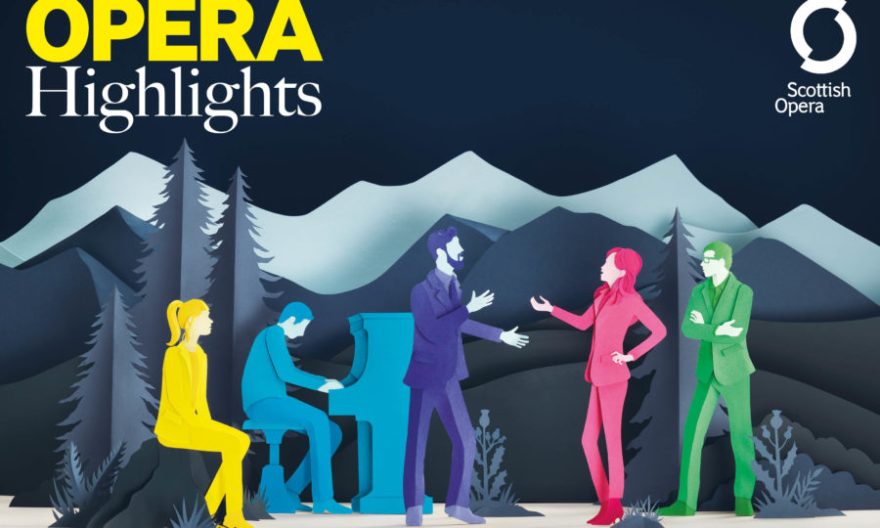 For the last few years Scottish Opera have been taking to the highways and byways of Scotland with their Opera Highlights show. Last night was the premiere of the 2018 show, and it’s safe to say that they have surpassed themselves, with director Daisy Evans putting together the perfect programme to introduce opera to those who may not be familiar with the genre, while keeping the die-hard fans happy – and how.

The structure could not have been more suitable. A lone woman (non-singing actor Hannah Birkin) sits on stage at her laptop as the audience enter. The music began with an eclectic and entertaining run through a selection of tunes played by Jonathon Swinard, the show’s musical director. Then the four singers arrived, dressed unmistakably in the individual colours of the Google sign. They take the mystery woman, and the audience, through a tour de force of opera, answering, as they go, the most commonly asked questions by those for whom the ways of opera are a mystery.

The promise of a mixture of the old and new was upheld, with works from the well kent likes of Mozart, Handel, Beethoven, Britten, and Gilbert & Sullivan, but also a new work from Scottish Opera Composer in Residence, Samuel Bordoli. The performances, from Soprano Sofia Troncoso, Mezzo-soprano Sarah Champion, Tenor Richard Pinkstone, and Baritone Dawid Kimberg, were superb across the board. It is incredibly moving, and exciting, to be in a small theatre when talent like this is on stage. You realise that it is not simply the singing which makes a great opera singer, it is in the acting and the interaction, with each other but, most importantly, with the audience.

Handling the comedy and tragedy, and everything in between, in fine style, these performers had their audience in the palms of their collective hands. There were laughs, tears, and at times a revered silence with nary a rustle of a caramel wrapper to break the spell. I have seen the last two Opera Highlights shows, and this was the best yet. The good news is, wherever you are in the country, you don’t need to miss out as they head from Glasgow to hit the road, starting in Ayr on the 22nd. For the full list of dates, and how to buy tickets, go to the bottom of this page. Opera Highlights was the most fun I’ve had in a theatre for some time and I can’t recommend it highly enough.

Here’s the trailer to explain more:

Here are some images from the show, with thanks to Scottish Opera and Credit to Sally Jubb Photography: