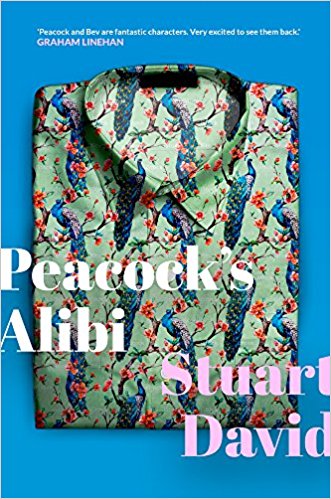 Two of the most challenging types of writing are crime and comedy. For the first you have to avoid repeating well-worn clichés while still making it as recognisably belonging to the genre. For the second, well, it’s got to be funny – perhaps the most difficult trick to pull off on the page. A successful crime/comedy, therefore, is something which is to be celebrated.

Christopher Brookmyre and Douglas Skelton are two writers who get the balance right, combining the dark side of life with the blackest of comedy, but they are rare. A worthy addition to that niche section of your bookshelves arrives in the shape of Stuart David’s latest novel Peacock’s Alibi. Set in Glasgow, and with an unerring ear for what the word on the street should sound like, Peacock’s Alibi is like a lost Taggart script as written by John Byrne. Like Byrne, David writes dialogue that isn’t how people speak, but how they wish they spoke – funnier, wittier, and with a better line in the last word. 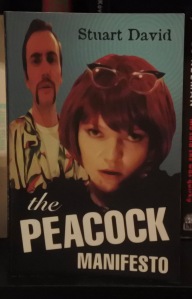 familiar. It may be from David’s previous novel The Peacock Manifesto (right), but anyone who is an Ian Rankin completest will surely do so as Peacock appears in Rankin’s Inspector Rebus novel A Question of Blood (Rankin told the Guardian in 2012 that Johnson was his favourite guest character to appear in the series).

How and why is a long story which you can find out about with a little bit of your own detection work (or, you could hear it for yourself at Stuart David’s Aye Write! event – details below*), but Johnson is fair put out by the whole thing, as he relates in this latest adventure. For Peacock Johnson, an “ideas man” who lives his life on the wrong side of the law, his literary fame has given him a reputation he neither wants or deserves.

This notoriety has made him a prized scalp for the police, particularly for Detective Inspector McFadgen who is nominally the Sherlock to Johnson’s Moriarty, or, perhaps more accurately, the Officer Dibble to his Top Cat. McFadgen has an obsession with Johnson which threatens to see him found guilty of crimes he didn’t commit. Add to that his wife Bev’s horror at the bridesmaid’s dress she has been asked to wear, and the constant grief from his disproving mother-in-law, and Peacock Johnson has his hands full and his ears well and truly bent.

Peacock Johnson is a memorable creation, one who fits perfectly the city in which he lives and avoids work. There are few places who build myths around, and make legends of, their criminals as Glasgow does, giving them nicknames such as “Godfather”, “Bananas” and “Iceman”, and consuming books about them at an alarming rate. It makes sense that this is the place where Peacock’s mythology is all too ready to be believed. It is also the perfect place for him to indulge his addiction – not drugs but duds. He believes there isn’t a situation which can’t be improved by some designer gear, but only the good stuff – a habit which isn’t cheap.

While the plot keeps you turning the page, it is the characters and the language which make Peacock’s Alibi stand out from the crowd. Peacock’s world is identifiable and believable, especially to those who know Glasgow. The references are spot on, and that gives those who inhabit it a credibility that they may not have had otherwise. Stuart David has written a novel which is firmly in the realms of crime fiction while at the same time playing with the genre’s conventions. It’s amusing, and a little meta, but in a manner which doesn’t pull you out of the story. It’s to be hoped that we get to read more about Peacock and his ideas as this is a character and a series which has the potential to run and run.

Peacock’s Alibi is published on the Polygon imprint of Birlinn Books.

* Ali will be in discussion with Stuart David as part of this year’s Aye Write! Book Festival at The University Of Glasgow Memorial Chapel, Thursday 15th March, 7.45 – 8.45pm. It would be great to see you there, and, you never know, Peacock may turn up as well to claim his cut… 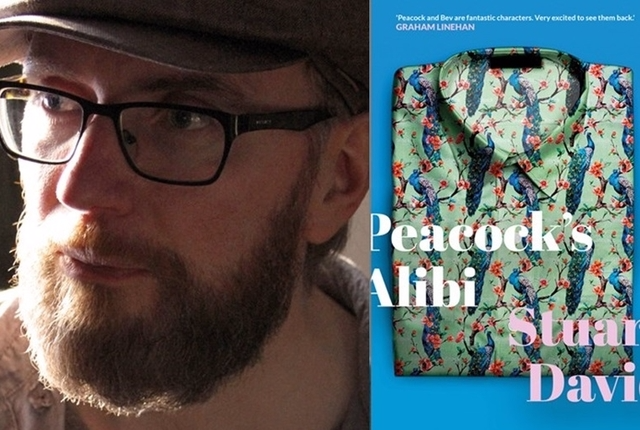 3 thoughts on “Fowl Play And Finery: A Review Of Stuart David’s Peacock’s Alibi…” Leave a comment ›