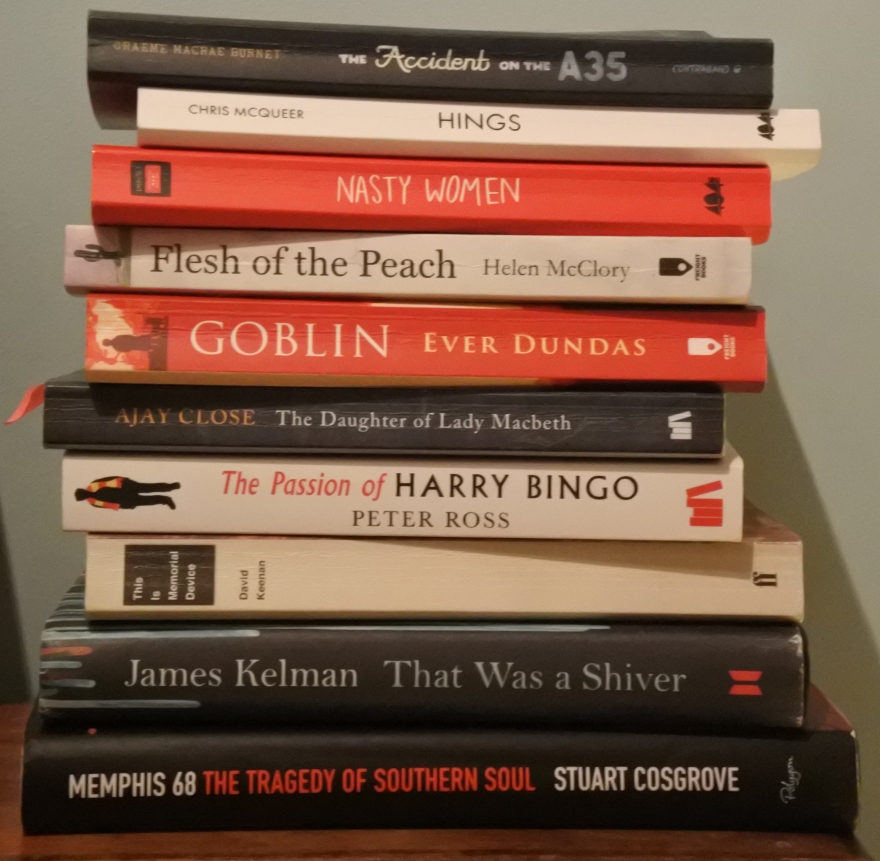 You may have had your fill of ‘Books Of The Year’ lists, but we like to think that Scots Whay Hae!’s selection is small, beautifully formed, and well worthy of your attention.

These are the books which stood out against stiff competition in 2017. The list could easily have been longer but we like to stick to a traditional Top Ten. Consisting of five novels, two short story collections, a musical/historical biography, a collection of journalism, and a peerless book of essays, they take you to Memphis, Airdrie, Springboig and the Alsace, with detours to Firhill, London during the Blitz, New Mexico and Millport along the way. Taken as a whole they are a testament to the breadth of artistic and cultural imagination at large in Scotland today. Need further convincing? Here’s what we thought at the time:

David Keenan – This Is Memorial Device

This Is Memorial Device is spot on in terms of time and place, but it’s so much more than that. It’s rare for a writer to capture both in a manner which avoids nostalgia and feels relevant, but Keenan manages to do so. This is a novel which is about what it means to be young, about the hows and whys – the when and where is less relevant. It’s about youth. Real youth, not the sort of arrested development that is all too common these days. I’ve read it twice and will do so again before too long. At the age of 46 it’s had a palpable effect on me. If I had read it when I was 15, (as happened with The Busconductor Hines and The Wasp Factory),  there’s every chance it would have changed my life. That’s your definition of a cult novel right there.

You can hear David Keenan talking about This Is Memorial Device on the SWH! podcast.

The Daughter Of Lady Macbeth at times displays a sensuality in the descriptions which will bring you to tears. The prologue would stand on its own as a short story, and the scene where Lili is helping with the birth of piglets will stay with you for some time. Close also looks at fears about our own bodies, how they can fail us and how that can make us feel less than whole, no matter what others may say. It is a novel about what it means to be a daughter and a mother, but also an individual forced into the company of others and the multiple roles which we are conditioned to play to try to make such relationships work. While writing a thoroughly modern novel Ajay Close has told a story which is eternal yet rarely addressed.

Nasty Women is unlike any other book you’ll read this year, and probably for the foreseeable future. That in itself is a reason for its existence and its importance. It looks closely at identity, race, gender, immigration, class, sexual violence, pregnancy, contraception, family, and so much more – all of which we need a greater understanding of and essays such as these can only aid that understanding. Those who would claim that it is anything other than essential reading simply haven’t read it. The stories are extraordinary in a manner which is two-fold – in their honesty and their rarity. These are voices which are seldom heard in the mainstream, despite what some may claim. It’s a book which refuses to deal in binary opposites, offering no simple answers for the simple reason there are none. It promotes constant questioning of ourselves and of others. That’s the only way to understand each other better. That’s the truth.

Faith, hope and understanding. These are the common threads which run through The Passion Of Harry Bingo. By focusing on individual experiences Ross manages to say more than any straightforward reportage could manage, looking beyond clichés and stereotypes where others use them too readily to score easy points. Peter Ross revels in the complexities of individual stories but also in the shared experience, believing that while we may do great things on our own, we could do even greater things if we only understood each other better, and reading his stories it is impossible to disagree.

You can hear Peter Ross talking about The Passion Of Harry Bingo on the SWH! podcast.

The importance of Hings should not be overlooked. McQueer is writing about people and places which are at best marginalised, more often ignored. It’s the real reason that Welsh’s Trainspotting was the success it was. Of course it’s a well written riot (and also a short story collection, by any other name), but it depicted an Edinburgh rarely, if ever, seen on the page before. And, more importantly, it portrayed people never written about before. You could make the claim that McQueer is doing something similar for Glasgow. Short story collections can be hit-or-miss affairs, but with Hings the last story is as strong as the first. Chris McQueer may claim he’s only having a laugh, and these stories are properly, laugh-out-loud, funny, but there’s a whole lot more going on.

Helen McClory – Flesh Of The Peach

Sometimes you read a novel which catches you unaware – enough that you have to pause, take a breath, and start all over again, taking the time to calibrate to the language and imagery used. More often than not it is a sign of writing which isn’t afraid to experiment and take risks. Such a novel has to convince you that it is right and it’s up to you to adapt your expectations. All of the above applies to Helen McClory’s debut novel Flesh Of The Peach, and it pays back the reader prepared to engage in spades. Her command of language is complete and it marks McClory as a writer to look out for. A truly immersive experience, if your preference is for novels where the journey is more important than the destination then Flesh Of The Peach is for you.

Graeme Macrae Burnet – The Accident On The A35

In ‘Why Write?’, the second chapter of his essay What Is Literature?, Jean Paul Sartre claimed that the relationship between writer and reader is one of mutual commitment stating, “To write is thus both to disclose the world and to offer it as a task to the generosity of the reader.”. The Accident On The A35 makes that relationship clear as the reader is drawn into the world that Macrae Burnet creates and is forced to engage with the philosophical and moral questions posed, and as such recognise themselves in the fictional world. It’s a relationship which is key to all succesful fiction. What The Accident on the A35 undoubtedly shows, especially when taken with his previous work, is a writer engaged with what he does, and committed to how he does it. If His Bloody Project introduced you to Graeme Macrae Burnet then now is the time to cement the relationship as it’s one which promises ever greater rewards.

You can hear Graeme Macrae Burnet talking about The Accident On The A35 on the SWH! podcast.

It follows on from Detroit 67: The Year That Changed Soul which was one of SWH!’s  Books of the Year for 2015 and which Stuart spoke about in-depth when he was a guest on the SWH! podcast. If Detroit 67 was the first part of a three-act play, then Memphis 68 fulfills the role of the second act, where things get worse before they can get better, setting the scene perfectly for the denouement. Yet again music would come to reflect the times, and in bringing the two together Stuart Cosgrove paints a vivid picture of people and place. There are few writers who so clearly and powerfully evince the relationship between popular culture and politics as he is doing with these books. The third book of his trilogy, Harlem 69, can’t come quickly enough.

Every so often a debut novel comes along which confounds your expectations and enchants your sensibilities. Ever Dundas’ Goblin is such a novel, one which has at its heart the same kindness and compassion as its central character, attributes which are underrated in fiction. An indelible and haunting novel, it will take you back to your own childhood and the stories you told yourself to try to make sense of an often mystifying world. But what is really impressive is how skilful, and daring, the writing is. Where many would feel the need to signpost every plot twist and point made, Dundas makes the reader work and wait, refusing to give up Goblin’s secrets cheaply; the full picture slowly developing as the other stories are told. Goblin is utterly enchanting in every sense, and reveals Ever Dundas as a talent to treasure.

James Kelman – That Was A Shiver

Kelman’s narratives are not about plot, they are snapshots of people’s everyday lives; lives which have been going on before we become involved, and which will continue once we have moved on, and that seems to work best in short, sharp bursts – fleeting, like thoughts themselves. His use of language has always been unorthodox, (paragraphs of ‘Pick Up The Pieces’ could be described as “concrete fiction”). He writes as we think – in bursts, non-sequiturs, broken streams of consciousness, and considering things we would never say or act on. As he does this his prose becomes poetic, less concerned with the “rules” of grammar and narrative structure. If you want to know more about the human condition then James Kelman is the writer for you, and, while not reaching the heights of his greatest short story collections Greyhound For Breakfast and Not Not While The Giro, That Was A Shiver is a fine addition to his collected works.

Tagged as: 404Ink, A Woman Of Integrity, Ajay Close, Chris McQueer, David Keenan, Ever Dundas, Flesh Of The Peach, Goblin, Graeme Macrae Burnet, Helen McClory, HIngs, J. David Simons, James Kelman, Memphis '68: The Tragedy Of Southern Soul, Nasty Women, Stuart Cosgrove, That Was A Shiver, The Accident On The A35, The Daughter Of Lady MacBeth, This Is Memorial Device