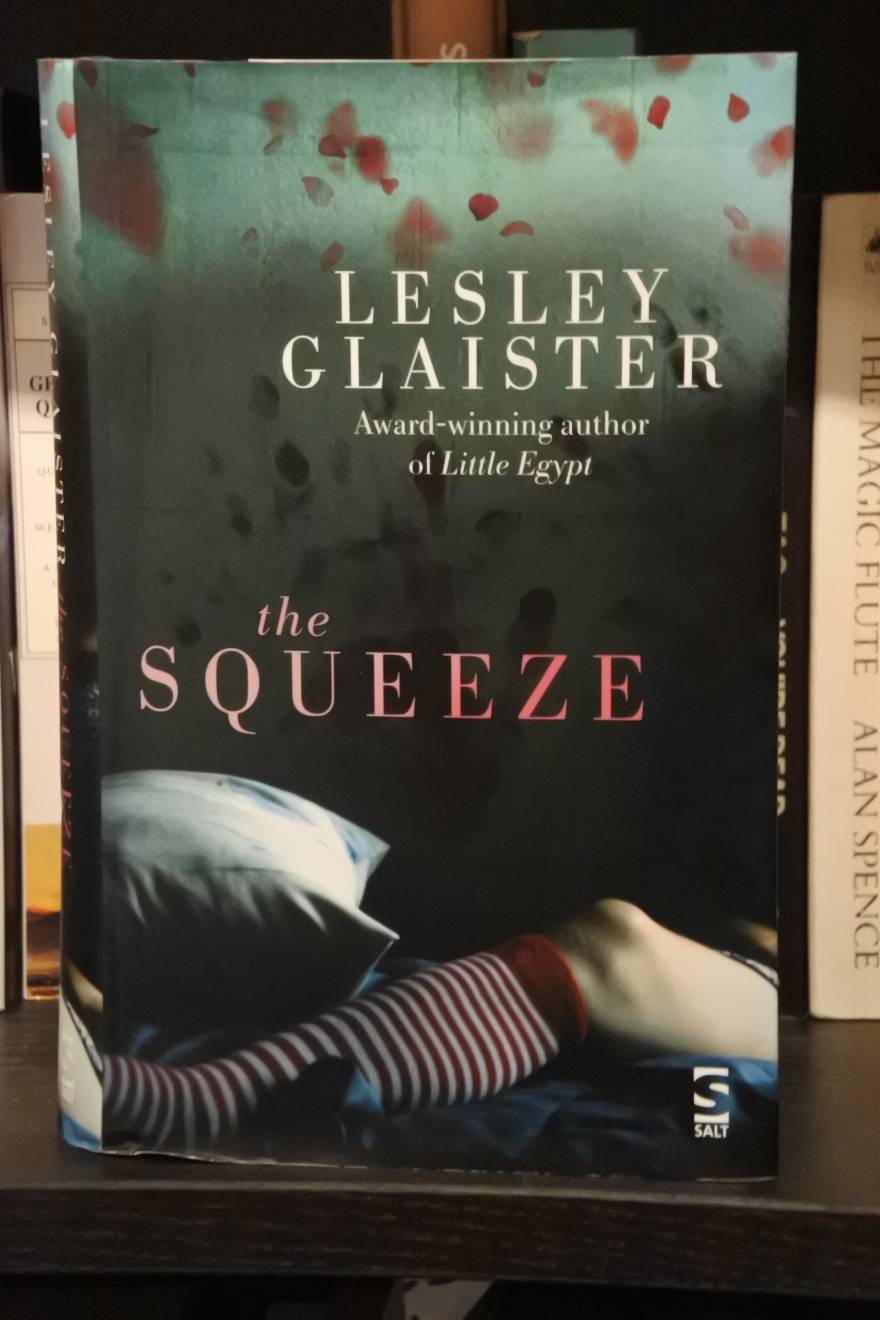 Les Liaisons Dangereuses, The Portrait Of A Lady, Oscar And Lucinda, Bonjour Tristesse – the best novels concerned with the complexity of relationships are those which refuse to bow to sentiment, and often are more concerned with puncturing the idea or ideal of love and romance than living up to it. Lesley Glaister’s latest novel The Squeeze takes this approach with honesty and searing insight and in doing so examines the effect of those opposing forces of passion and reason, the desires that drive us to get together and the justifications made for staying together. The Squeeze could be considered an anti-romantic novel, and that’s what makes it compelling.

It certainly doesn’t pull its punches when detailing what humans are capable of. Mostly set in Edinburgh, 1989-92, it opens with a short chapter from ‘Alis’ (the chapters are named after the characters who narrate them). It’s half a page which nonetheless sets the tone for what is to follow as it posits the dangers of dreaming when set against the harsh reality of some people’s lives.

Alis and her friend Marta are from post-Ceausescu Romania where crime and poverty come together to make desperate people do desperate things. The two teenagers are trafficked from their home to work in one of Edinburgh’s euphemistically names ‘massage parlours’. Their story is terrifying and all too believable as subsequent men promise them not even the world, just the possibility of taking them out of their current situation, if only for a short while, only to deliver them into a living hell. Held as prisoners with only their captors and customers as contact, the two’s friendship and the hope of home is the only thing that they can cling to.

The other strand in the novel focuses on the life and loves of Mats, a Norwegian who has come to Scotland’s capital for work reasons, something which has put a strain on his marriage to Nina, although he is slow to realise it. Their relationship is one which seems potentially perfect to Mats bar the lack of children, a situation he is keen to put right. This belief is the first time we sense that when it comes to self-deception Mats is a master.

Barely a year later Mats and Nina are divorced and he has remarried to Vivienne – his desire to be a father a not inconsiderable factor. Vivienne’s chapters are in the form of audio recordings which she does as therapy, something she has undertaken as she feels from early on in their marriage that things are not as they should be. Mats has, apparently happily, made a home together not just with her but also her son Artie, determined to create the perfect family which eluded him previously. Both Mats and Vivienne believe they have roles to fulfil, roles which society expects, even if they are not sure how to do so or fully understand why.

At a time which should be happy for both, what unfolds is a sense of disappointment and anxiety, and simmering tension because of it. The Squeeze doesn’t avoid the clichés which surround relationships, it’s more that Glaister plays with, and unpicks, them.  Mats wants to be the breadwinner and protector, Vivienne the good mother and wife. All the while there are the often brutal ‘Marta’ chapters which put their problems into stark perspective as she is used and physically abused by men who neither know nor care who she is. Her life is about survival, and that is not guaranteed.

When Marta, Mats and Vivienne’s worlds collide it is down to yet more deceit, lies and guilt, primarily on Mats part as he seeks redemption and the chance to do the right thing, although  arguably for the wrong reasons. Glaister asks questions about why people act as they do – what are the justifications, and can any act be considered purely unselfish? Once again, dreams of a happy life are cruelly glimpsed before being destroyed by reality and all too human failings. The final part of The Squeeze jumps forward to 2005 and without giving anything away it’s fair to say that the intervening 13 years have been filled with a mixture of some love but a lot of regret as the central characters come to realise that actions have consequences which can last a lifetime.

With The Squeeze Lesley Glaister proves she has an understanding of human frailty and weakness which is forensic, and it is rare to read about relationships with such honesty and insight. It would have been easy, and perhaps understandable, to make these characters reprehensible or caricatures, but they are heartbreakingly human with all the ego, anxiety, faults and frailties that entails.  You’ll recognise aspects of yourself in this novel, and if you don’t you might want to reconsider as it may just be you’re only deceiving yourself.

The Squeeze is published by Salt Publishing