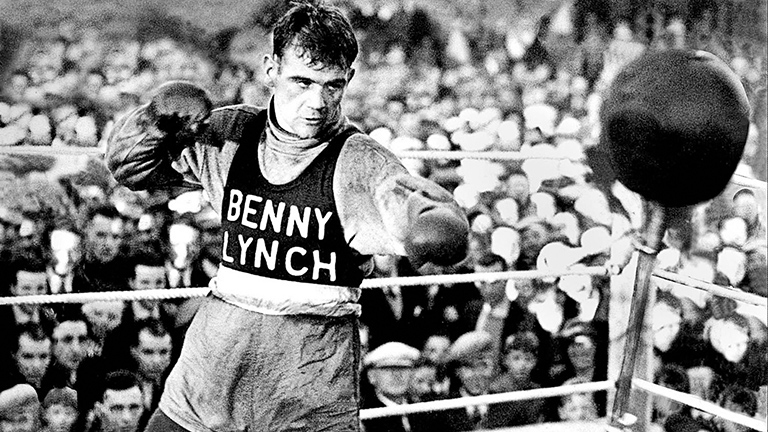 Any informed discussion of the greatest all-time Scottish sports stars will throw up familiar names. Alongside the likes of Alan Wells, Liz McColgan, the Lisbon Lions, Andy Murray, Denis Law, Jackie Stewart and John Thomas ‘Jocky’ Wilson will be that of boxer Benny Lynch. However, the passing of time increases the risk that those who have been members of this elite group for the longest are in the greatest danger of being forgotten. The fact that the Lynch legend has lasted this long is testament to his impact on sports fans and beyond. Like Ali, Leonard, McGuigan and Chavez, he transcended the sport of boxing to become a national icon and hero. But Lynch last fought in 1938, lest we forget.

Andrew Gallimore’s documentary, Benny, which previewed at the Glasgow Film Festival last week, is timely for this very reason. It is not only a reminder of a great boxer, arguably one of the very best, but of a time and place, namely Glasgow in the 1920s and ’30s, which is also in danger of being forgotten. Glasgow was overpopulated, ripe and rotten, and at the heart of it was the Gorbals, which had a population density six-times higher than anywhere else in the city.

This is where Benny Lynch was formed and forged, and for all of its decay and despair, it was a place which had a hold on him. If anyone has ever wondered why they demolished the old Gorbals this film will answer that for you in the most direct manner imaginable. Benny is an important social document as well as a sporting one, on the man and his city, as, if they are forgotten, then the lessons which should be learned from both are in danger of being repeated.

Lynch was as famous as any other Scotsman of his day, revered at home and abroad, fighting in front of tens of thousands of fans who loved his ‘gallus’ style, dancing around the ring, daring his opponent to try and hit him. He was a fighter ahead of his time, and one who would take on anyone. I had heard of Lynch, of course, but mainly from my granny and great-uncle who used to talk about how no one could lay a glove on him. For many Scots he was their representative in the wider world, putting the ‘wee-man’ from the wee country on the map.

Benny  is not a groundbreaking film in terms of style, but that’s no criticism as it is what its audience will expect. There are interviews with relevant talking heads, boxing historians, academics, social commentators, and boxers, including Lynch’s fellow world champions Jim Watt and Irishman Bernard Dunne. Each of these interviews makes the most of the individual’s knowledge and expertise to weave together a rounded picture of Lynch; what made him, and what led to his eventual downfall. What Gallimore’s documentary does which you won’t have seen before is to reveal footage of Lynch’s better known fights, and even on the often sped up and ageing film you can tell that this was an athlete working on a different level to those he shared the ring with.

Of course, the film mentions the lows as well as the highs.  A familiar tale is told of hangers-on and parasites who would be there when the times were good, and disappear when things turned bad. Benny Lynch died at the age of 33 having lost a battle with alcohol and ill-health, but to focus on this is to miss the extraordinary life which he lived. It would be similar to the way that some people focus on George Best’s latter years rather than his performances on the football pitch, when, like Lynch, there is a strong argument that at his peak no one-could match him. The legend of Benny Lynch endures, and Benny eloquently tells us why.

If you can’t see it in the cinema Benny should be on a Scottish TV screen near you soon. For sports fan  and beyond it is a must see.

Posted in: film, Glasgow Film Festival, You Have Been Watching...

2 thoughts on “You Have Been Watching…Benny” Leave a comment ›