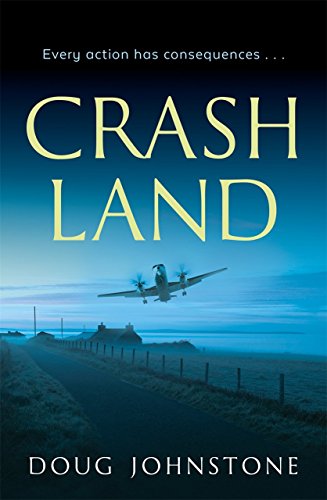 There are few things I look forward to more than a new Doug Johnstone novel. Over the last decade, beginning with 2006’s Tombstoning, he has produced a body of work which manages to be familiar yet absolutely individual, and has written thrillers which defy formula. Since 2011’s Smokeheads in particular it has felt as if this was a writer who had found his voice and a style which made him stand apart in a very busy marketplace. That style is literate and lean – Johnstone doesn’t waste a word in order to move the plot along. Legendary Motown Svengali Berry Gordy used to appeal to his songwriters, “Don’t bore us, get to the chorus”, and it appears Johnstone has a similar approach to writing.

Taking his eight novels to date as a whole, you can begin to see two distinct threads emerge which can loosely be divided into domestic/family noir, and more straightforward thrillers. His latest, Crash Land, is definitely in the latter camp. It’s a breathless tale of “boy meets girl – boy and girl flirt and drink gin – boy and/or girl crash plane”, and it will delight fans of Smokeheads, Hit & Run and The Dead Beat in particular as it is a return to the breakneck action of those books, where an unsuspecting individual gets embroiled in life-changing events which are mostly of other people’s making.

Johnstone’s writing allows the reader to fill in the gaps, not concerning himself with details which only get in the way of the storytelling. It’s interesting to compare his work to that of another writer of crafted thrillers, Bret Easton Ellis. Whereas the latter goes into painstaking detail about the clothing, music, food and business cards of his characters, Johnstone goes straight to the action; the death, the deceit, and the inevitable fallout. In his hands American Psycho would have been a short story. In Crash Land, the crash in particular is a visceral piece of writing which manages to convey the chaos of such an event in a page where other writers would have stretched it out to the point of overkill. Rarely has the term, “less is more” been as apt.

Finn Sullivan is the young man whose life is literally turned upside down when he meets Maddie Pierce, a classic femme fatale in the noir tradition who is believably beguiling while remaining dangerous at all times. If that sounds clichéd then you’re mistaken as Johnstone embraces the tropes of the genre and brings them bang up to date.

Finn quickly finds himself playing a game to which he doesn’t know the rules, and things unravel at a speed which is not just believable but necessary. After the crash he has to recover quickly, but finds the body often heals more readily than the mind. Guilt and desire are the overriding and competing emotions which are to the fore, and which cause him to lie to strangers, friends, and family alike, but also to himself.

He feels protective towards Maddie while increasingly coming to realise that it is he who needs protection. As with any novel based on plot twists and turns, the more that is said in a review the less impact it is likely to have for new readers so I’ll leave the reveals there, suffice to say that Finn increasingly acts in a manner which only amplifies his sense of shame and diminishes his self-worth, but he is apparently unable to do otherwise. Guilt and desire – these are powerful, opposing, emotions. Emotions which entire religions are built on.

Those who came to Doug Johnstone’s writing through Gone Again or The Jump may not take so readily to Crash Land. It doesn’t carry the strength of emotion or the intrinsic vulnerability that can be found in those more complex novels, where he offers readers recognisably immediate and familiar scenarios. However, if you like your thrillers fast and furious then Crash Land is the perfect book for you. I used to doubt reviewers who said that they finished a book in one sitting, but in all honesty I cracked the spine at 8pm on a Thursday night and headed to bed an exhausted yet happy reader around three o’clock on Friday morning. Have no doubt, Doug Johnstone is one of the best writers around, both in terms of style and substance. No one’s thrillers are quite as thrilling.

Here is the audio version of this review:

You can hear Doug Johnstone talking about his previous novel, The Jump, on the Scots Whay Hae! podcast.

3 thoughts on “Brace Yourself: A Review Of Doug Johnstone’s Crash Land…” Leave a comment ›