The driving idea behind Scots Whay Hae! has always been to celebrate the best of Scottish culture and art, which means that by definition we usually don’t write about the failures. There are people paid to do that, and life is too short to do it otherwise. However, I feel that the recent BBC adaptation of Iain Banks’ 2012 novel Stonemouth cannot be allowed to pass without comment as the great man deserves better than this.

The story revolves around Stewart Gilmour and his return to the titular town of Stonemouth for his best friend Calum’s funeral. This follows years of banishment for cheating on Calum’s sister, Ellie. Their father is a local gangster, Don, who had chased Stewart out and who has decreed he can return for a few days while the funeral happens before continuing his exile. Stewart begins to believe that there is more to Calum’s death than meets the eye. However, this may be because he feels he needs to do something as he is wracked with guilt after ignoring his friend’s previous pleas for help.

That’s the setup, and before I talk about the TV adaptation I should say that Stonemouth is not one of Banks’ very best books, such as The Bridge, The Wasp Factory or The Crow Road, but it is not far off it. It was certainly a return to form after a run of disappointing novels which included The Steep Approach To Garbadale and The Business. You can read a full review of it here, but the short version is that it marked Banks acknowledging his own style and recurring themes, and embracing them. So, for the seasoned reader of Banks, there are the familiar tropes of family secrets, hope offered by the love of a good woman, traumatic childhood events, class divisions, and a healthy dose of violence. There’s even a bridge thrown in for good measure, a sure sign that the always playful Banks was happy with his own past.

All of those things are touched upon in the BBC adaptation, but nothing is explored in any detail, which brings us to the first of the problems. At only two episodes long there is just not the time to explore with any subtlety the relationships on which the book is based. As a result we care nothing for anyone involved. One of Banks’ great skills is making the reader care about individuals who actually behave in a petty, selfish and often despicable manner. That can only be done by fully exploring a character’s motivations, beliefs and showing their often well hidden humanity. Take that away and you’re left with people who are simply petty, selfish and despicable. At a time when multi-episode dramas are the norm, and more successful than ever, Stonemouth has not been given the screen time to explore any individual or plot-line in any detail, and you are then left with two-dimensional characters at very best. Even the bridge is given thin gruel in terms of characterisation, but that was bound to happen given the constraints of time.

Which brings us to the second problem; the editing, which surely is linked to the first. The first episode was just about passable, although still suffering from characters being introduced and then passed over (the Murston brothers get particularly short shrift), but the second is just a mess – almost as if belonging to a different drama altogether. The cliffhanger which ended part one is skipped over in the opening credits, and what with everything needing resolved in one hour the action ends up a succession of brief snatches of conversation followed by Stewart being chased from one scene to the next. There is so little time between him being warned not to talk to Ellie…and his talking to Ellie, over and over, that he just comes across as stupid. The moment when the two of them are talking on the beach and Joy MacAvoy’s literally scarlet woman from episode one, Jel MacEvett, comes to apologise for helping to ruin everyone’s lives, no-one on screen seems to care, so you are left asking, “Why should I?”.

Which leads me to the third problem, which is that of the cast. In the previous TV adaptation of Banks’ work, The Crow Road, Scottish acting legends were plentiful including Peter Capaldi, Bill Paterson, Alex Norton, Stella Gonet and David Robb, but they were equally matched by the younger cast of lesser known lights, such as Valerie Edmond, Joe McFadden, Dougray Scott and Simone Bendix.  In Stonemouth, the cast includes Peter Mullan, Gary Lewis (both of whom are as good as you would expect) and the criminally underused Sharon Small. None of the younger cast manage to keep up with them, with the exception of Brian Gleeson’s scheming Powell, and this has the effect of everything dropping in terms of quality and excitement when they are not on screen. Through the lack of character development, everyone feels like they’re playing a cameo, even the leads. Stewart’s relationship with his parents, the unrequited love of his pal Ferg, the hinted relationship between Calum and his other sister, Grier; every interesting plot point is mentioned, then over-looked, as if they were a box to tick before Stewart has to start running again.

I’m presuming all of the above problems (and the rest) were down to the usual constraints of time and money, but you do end up wishing the BBC hadn’t bothered at all rather than produce something half-arsed in such a manner. The whole thing reeks of a missed opportunity. The adaptation of a fine novel by one of Scotland’s greatest and most well-loved writers, with some stellar names attached, and with one of Scotland’s best screenwriters, David Kane (Jute City, Ruffian Hearts, The Field of Blood, Shetland), dealing with the screenplay, it should have been a triumph. Instead, everything feels so rushed and discombobulated that you lose patience with it very quickly. I hope this isn’t the last adaptation of Banks’ work we see on screen as he deserves so much better, but then everyone involved with Stonemouth deserved so much better. Good use of Young Fathers on the soundtrack, though. Well, I couldn’t write a whole review without mentioning something positive. It wouldn’t feel right.

If you want to take a look at Stonemouth for yourself, you can still watch both episodes on iPlayer, but if anything about the above interests you I highly recommend the novel. 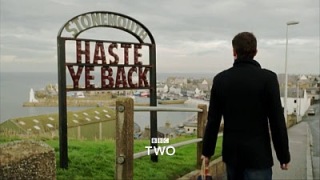 Here’s the audio version of the review, if you prefer:

A few pics from tonight's @ccfest gig @thegladcafe. Just a fantastic night, and if you haven't yet check out The Music of Others, the album out on @glorioustracesrecords then I urge you to do so https://glorioustraces.bandcamp.com/releases
@colonelmustarddijon5 take the roof off @celtic_connections
Cracking night of music @thehugandpint tonight for the @432presents showcase with @maaryamusic @itskatherinealy @eleanor_kane & @lemondrinkband ...
A fond yet forlorn farewell to the always excellent @404ink magazine...
Some pics from tonight's wonderful @emmaspollock gig @thegladcafe with Louis Abbott, @graemejohnsmillie & @cellopete.
Some pics from @barriejamesofficial sensational set @13th_note. His forthcoming album promises to be rather special so watch this space for news - cos I'll give you it...

“Always great to chat with Alistair Braidwood at Scots Whay Hae, one of Scotland’s most perceptive (and jovial) critics.” – Graeme Macrae Burnet