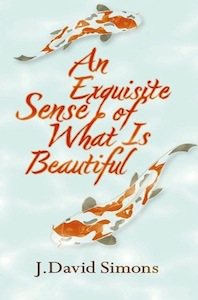 If you are going to call your novel An Exquisite Sense Of What Is Beautiful then you have to be prepared to back it up in both style and substance. The title recalls such seminal and philosophical texts as The Unbearable Lightness of Being or A Heartbreaking Work of Staggering Genius, and that’s a lot to live up to. Luckily David Simons does this with style and substance.

Simons pulls off one of the hardest tricks for a novelist, reflecting world events through the lives of individuals while avoiding the reader feeling like they are being given a history lesson or are being preached to. I was initially concerned about this when the post-war relationship between Japan and the US was under discussion, but soon realised that this was scene setting, and that who the characters are rather than where they are is of primary importance. It is through them that the bigger picture of the relationship between Japan and the US, and the UK, in the second part of the 20th century is best understood.

Simons deals with some major topics, but does so with a wonderful subtlety that lends itself to recognition and empathy. The novel is partly about the idealism of personal aesthetics versus the reality of everyday life, a romantic fallacy set against the all too predictable failings of individuals. The higher the moral and aesthetic ground taken, the more spectacular the fall, and so it is with the central character of Edward, a charismatic and successful writer whose skeletons are threatening to overwhelm him as he approaches his latter days.

Most of Simons’ characters are flawed, and recognisably so, but this is Edward’s story and it is his journey from a confused, if at times hubristic, youth to a man facing his final days that is so impressive. His life comes to be defined by love, and regret, and the passing of time tips the balance from one to the other, although it also allows for forgiveness, or at least acceptance, from others if never quite from himself.  I’ve never quite bought the sentiment of ‘Non, je ne regrette rien’, and nor does Simons.

There are a couple of books and writers that An Exquisite Sense Of What Is Beautiful reminds me of; the urban novels of James Leslie Mitchell (better known to most as Lewis Grassic Gibbon) and the unexpected darkness in the work of Robin Jenkins. The mixture of the personal and political can be found more recently in James Robertson’s And The Land Lay Still, but the novel that I kept thinking of as I read was Anthony Burgess’s Earthly Powers, in style if not in story.  Like that novel An Exquisite Sense Of What Is Beautiful is artistic, literary and thoroughly involving.

The novel moves in time and place, with the majority of it set in London and Japan. When I was young I fell in love with Japan, or at least with a Western ideal of it. Simons, who has lived and worked there, shows a different side to a country that we may think we are familiar with, and does so with the authority and lightness of touch that only comes from someone who knows that of which he writes.

This is a book that gets better as it goes progresses, and by the conclusion you are looking forward to spending more time with Edward and his friend Sumiko in particular. This is because as he grows older Edward is a more sympathetic and reflective character than the judgemental and idealistic youth. There is a sad wisdom to him that has come all too late. Simons depicts the pains and disappointments of old age with an honesty and eloquence which is as rare as it is welcome.

In a final flourish he even manages to leave us wanting more by ending with chapters of Edward’s celebrated novel The Waterwheel, a book which I would have liked to have continued reading. This device is just one last example of a novelist who understands the craft of writing and who, in this case, has applied it exquisitely.

Here is a video of J. David Simons discussing his novel:

2 thoughts on “Love And Regret: A Review of J.David Simons’ An Exquisite Sense of What Is Beautiful…” Leave a comment ›