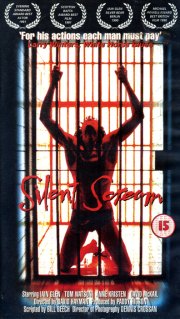 David Hayman has been a central figure in Scottish cinema over the last 40 years as an actor and director. Perhaps best known these days as DSCI Michael Walker in ITV’s Trial and Retribution he has appeared in classic, and often cult, films such as Walker, Venus Peter, My Name is Joe and The Last Great Wilderness. For auld punks he will be remembered as Malcolm McLaren in Sid and Nancy, but his most iconic role was as Jimmy Boyle in 1979’s A Sense of Freedom, one of the most brutal and raw films ever made in Scotland, with Hayman mesmeric in the central role.
He may be rightly lauded as an actor, but he is underrated as a director with at least three interesting films under his belt. These are The Hawk, a pitch black thriller starring Helen Mirren, The Near Room (see You Have Been Watching…The Near Room) and 1990’s Silent Scream which saw Hayman revisiting Glasgow’s Barlinnie Prison Special Unit, which once housed Jimmy Boyle, to tell the story of Larry Winters.
Considering this is a film the majority of which is set in a Glasgow prison, the mood and tone is unexpected. There is a magical realism that reminds me in parts of Terry Gilliam’s Brazil and more recently Lynne Ramsay’s films; or even, with the use of illustrations which become animations, Alan Parker’s film version of Pink Floyd’s The Wall. This surrealism is down to two key directorial decisions. The script is based not only on the life of Larry Winters, but also his writing and the accompanying nightmarish sketches which tell a tale of someone who suffered from psychotic episodes, and who relied on drugs, both prescription and non, to deal with life.
Then there is the structure of the film, which has Winters reliving his life as he trips on pills smuggled into the prison. This turns out to be a long night of the soul and he is visited by the spectre of the Soho barman he murdered in 1963, an old lover (dressed at times as Alice), and a white horse which may or may not belong to William of Orange. These understandable hallucinations allow Hayman’s direction to go into the realms of fantasy, and although the film was made in the 1990s, it captures the 1970s in fine detail, but particularly in attitude. Even in prison this is a time of experimentation, never more so than in the Special Unit, and Hayman clearly knows that of which he directs.
Iain Glen plays Larry Winters and it is a performance that is in turns subtle and startling. Recently Christian Bale was praised for emaciating himself for his role in The Machinist. Glen beats him to it, horrifically skeletal as he lies naked in his solitary cell. Glen is another underrated performer, and here he is perfectly cast as the troubled Winters; at times dangerous, at others innocent and childlike, often confused and dazed as he tries to come to terms with how life looks through his eyes. It is quite believable that he opts to try and tune out whenever possible.
It looks as if Hayman called upon plenty of favours when it came to the supporting cast, as some of Scotland’s best actors, from screen and stage, are involved. A young Robert Carlyle may be the best known, but there are turns from Tom Watson, Sandy Morton, Caroline Paterson, Julie Graham, Johnathon Battersby and, as another screen version of Jimmy Boyle, Paul Samson. Hayman manages to get incredibly realistic performances from the cast which make the more magical flights of Winters’ imagination all the more powerful.
I can’t find the trailer online but here’s a great clip of David Hayman being interviewed alongside producer Paddy Higson about the film:
Silent Scream is a powerful film that depicts real human tragedy. It never shies away from the fact that its central character was a convicted murderer, or that Winters was a complex and troubled man who was often holding onto his sanity by his fingernails, but it is more balanced than you will expect. For every abusive police officer or prison guard, there are reformers who, perhaps naively, trust their charges, and who are determined that prison should be about rehabilitation as well as punishment. There are flashbacks to Winters’ childhood years, but these are not stereotypically grim, and he appears to have had a mostly happy time. Hayman gives no easy answers or trite excuses. You may read this review and want to avoid Silent Scream like the plague, but I urge you to think again. It is grim and violent in places, although nothing like A Sense of Freedom, but it is more about the, perhaps short and rare, moments of pleasure that can lift even the most apparently wretched spirit, and the redemptive power of artistic expression. It is a film that is, despite the tragic conclusion, surprisingly life affirming.