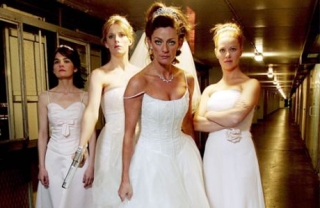 Many have accused Irvine Welsh, including yours truly, of not being able to write convincing female characters. This is obviously something which riles our Irvine and which he tried to address with Wedding Belles, the 2007 feature length drama which he wrote with Dean Cavanagh for Channel Four. It’s an entertaining watch, but, as with a lot of Welsh’s work, there are problems.
In an interview with The Guardian, in the same year  as Wedding Belles, Welsh said:
“Growing up in Edinburgh, we had a very black and white understanding of people, so women were naturally divided into virgins and whores. That was what I grew up with: there were some lasses that you don’t take home to Mummy.”

It’s a pity that the interviewer didn’t ask which side of this divide ‘Mummy’ herself belonged, but this, apparently natural according to Welsh, division colours the depiction of women in his writing, something that many critics have commented upon and which makes Wedding Belles more interesting than it may at first appear. This was obviously Welsh’s attempt to answer those critics. He claimed in an interview with The Sunday Times that the drama was “[…] a chance to write strong working class women”. He went on to state:

“I’ve always liked the women characters I’ve written, but they have never had the airtime, and yet some of the most interesting things I’ve done in my life has been with groups of girls. The same challenges apply as with men – loyalty to the group, developing as an individual – but they’re more acute because of the pressure to procreate. It’s about struggling to maintain camaraderie against the forces of commerce and biology”.

This is a disingenuous statement at best. Claiming that his female characters have never had the ‘airtime’, as if this is not something under his control, is strange and he doesn’t address the stereotypical nature of those characters who have appeared on page and screen. It seems that Welsh’s view of women, as set out in The Guardian interview above, is one he has difficulty overcoming.

But enough of my PC ranting, the question is ‘what is Wedding Belles actually like?’ There is no doubt that it is a riot in places, containing all the sex, drugs, bevvy and deceit that you would expect from the pen of Welsh. The cast is fantastic, with the central quartet of Michelle Gomez, Kathleen McDermott, Shauna MacDonald and particularly Shirley Henderson, who is heartbreaking as Kelly, (the Spud of the gang so to speak) all superb. They are as much of a gang as the Trainspotting team, with closer bonds, but whose actions are inconsistent with the characterisation which Welsh gives them. And this gets to the problem of Wedding Belles. Welsh hasn’t written strong working class women, he has written another group of damaged males and simply dressed them in women’s clothes. Despite the best efforts of those on screen I just don’t believe in these characters and even though I enjoy much of the madness on show, I don’t engage with them as I did with those in Trainspotting.

Wedding Belles is worth a watch, but for those performances rather than the drama itself. If you’re missing a fix of Welsh drama then I would say return to Trainspotting or 1998’s The Acid House, two films which make the most of the source material, and which saw Irvine at the peak of his powers. However, here’s the first part of Wedding Belles as a taster:

I admire a lot of Irvine Welsh’s fiction, as I’ve written elsewhere (see indelible-ink-trainspotting), but there are scenes in many of his books and dramas, particularly latterly, which I find deeply problematic. Such passages, as can be found in Marabou Stork Nightmares, Filth, The Bedroom Secrets of the Masterchef and Crime are not simply sensational or shocking, but hateful, inconsistent and morally questionable. The female protagonists in Wedding Belles are Welsh’s attempt to respect the women in at least one of his dramas, but he doesn’t, or perhaps can’t, manage it and until he does there will be, for me at least, a question mark over much of his fiction.

A spin of 'Victory Lap' in tribute to Book Group as they decide to call it a day. They will be missed...
David Keenan & @restlesswaynex @waterstones.argylestreet tonight - everything a book event should be...
A few pics from a magical night of music in the rather special setting of Old Trinity College with @cgjpmusic @zoebestel & @blaircoron
A new novel from Ajay Close is always to be celebrated, and her latest 'What We Did In The Dark' is out this month, published by @sandstonepress
Some pics from a cracking night of music with @peterjohnstonemusic & @pocketknifeband supporting @thejustjoans
An unforgettable and special night @cca_glasgow for @celtic_connections with @beerjacket, @juliaandthedoogans and @cairnstringquartet It fair gladdened the heart...