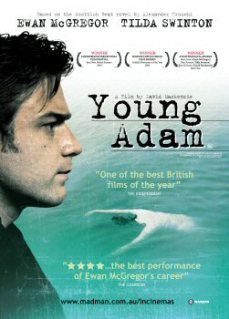 David Mackenzie is slowly building an impressive body of work. Films such as The Last Great Wilderness, Asylum, Hallam Foe  and the forthcoming You Instead and Perfect Sense are some of the best and most interesting films of recent years. Mackenzie has a wonderful ability for making often downbeat and depressing subject matter engaging and beautiful to look at. There is a surreal dreamlike quality to his films, dreams that can turn to nightmares without warning.
His 2003 film Young Adam is an adaptation of Alexander Trocchi’s 1957 novel of the same name. If Mackenzie’s film had done nothing more than point people in the direction of this underrated novel it would have been worthwhile, but it is a mostly successful attempt at bringing a novel which many felt un-filmable to the big screen. This was only Mackenzie’s second feature and the cast he was able to bring to the project speaks volumes for how he is thought of as a director.
The central roles are taken by Ewan MacGregor, Emily Mortimer, Tilda Swinton and Peter Mullan. As you might expect Swinton and Mullan are scene stealers, but MacGregor is good as the amoral Joe, and Mortimer is wonderfully vulnerable as the abused Cathy, and her performance makes you wonder why she hasn’t appeared on screen more. The last time I remember seeing her was as Alec Baldwin’s brittle-boned girlfriend in 30 Rock, but she is a strong screen presence who deserves bigger roles.

I have written about my admiration for Peter Mullan many times on these pages so I’ll only say here that he is as reliably Mullan as you would expect. Tilda Swinton, who I have loved ever since her performances as Cissy Crouch in Your Cheatin’ Heart (see Your Cheatin’ Heart…) and as Orlando is Derek Jarman’s 1992 film, has quietly built a brilliant career. Highlights include performances in Adaptation, Thumbsucker, Broken Flowers, Michael Clayton and Burn After Reading. Like Mullan she uses her fame to promote film in Scotland, and is one of the most important figures in Scottish culture today. Where various councils and ‘creative’ bodies sit around deciding who should get what share of an increasingly small pot of money, she realises what is important and creates opportunities for films to find an audience. You have to make people aware of what’s on offer, and too many people think that the creation of film, theatre, fiction, music etc is enough. That’s the beginning,  it’s just as important to get the work into people’s hands, so to speak. Only then will you really know if it is any good or not. But enough of the railing, here’s the trailer for Young Adam:

The film is beautifully shot, often with a wonderful sepia tinge that makes Glasgow look as if it rarely sees the sun (who’d have thought), and also makes many scenes uncomfortable and claustrophobic. It also shows parts of the city rarely seen on screen, making great use of the canal and the twists and turns of the Saltmarket. At times it reminds me of the work of Jean-Pierre Jeunet in that Mackenzie also creates a world that is hyperreal and unreal simultaneously, and you are never sure if what you are watching is reliable. David Mackenzie; the unreliable director.

Here’s a fascinating ‘behind the scenes’ video which interviews all the main players involved in Young Adam:

Coming soon from David Mackenzie are You Instead, the odd-couple romance shot over three days at last years T in the Park (see You Have Been Watching (Glasgow Film Festival Spec…) and the apocalyptic love story that is Perfect Sense, which once again stars Ewan MacGregor alongside Eva Green, and which I’m reliably told is moving and genuinely unsettling. With a new Ken Loach film being shot in Glasgow as I type, the excellent The Island getting a release (see You Have Been Watching (Glasgow Film Festival Spec…), Peter Mackie Burn’s Glaswegian documentary Come Closer hitting the festivals this summer, and the long awaited return of Lynne Ramsay (so excited) with her adaptation of Lionel Shriver’s We Need To Talk About Kevin (starring Tilda Swinton), this is shaping up to be a rather special year for Scottish film and film makers.