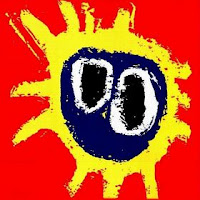 There are certain albums that change our perception of what music can do. Think of Elvis Presley’s 1956 debut, The Beatles Revolver, The Beach Boy’s Pet Sounds, The Sex Pistols Never Mind the Bollocks and Public Enemy’s It Takes a Nation of Millions to Hold Us Back. To that list should be added Primal Scream’s 1991 album Screamadelica. Like those other albums named it was visionary, what sets it apart is that the vision didn’t come from anyone in the band. Even the most ardent Primal Scream fan, and the band themselves, would admit that this is Andrew Weatherall’s record. Yes they wrote the songs, but in terms of how the record sounds The Screamers were just delighted to enjoy the ride. And how.
There were other albums of the time that married rock and dance music, most notably The Happy Monday’s Pills, Thrills and Bellyaches, The Stone Roses’ The Stone Roses, Jesus Jones’ Liquidizer and even The Soup Dragon’s Lovegod, all of who got there first, but Screamadelica was something else. Its seeds were sown in Primal Scream’s second, self titled, album Primal Scream which couldn’t have been further away from the burgeoning House scene of the late 80s. While many people were dancing the night away to Derek May and Kevin Saunderson the Scream were unashamedly trying to be the MC5 and The Stooges. Songs like Ivy, Ivy, Ivy and Gimme, Gimme Teenage Head were no nonsense power pop and the band were head to toe in leather. The album bombed, (unfairly in my view) but found enough discerning listeners to spread the word. One of those who heard something they liked was Andrew Weatherall. He took Robert Young’s closing riff to I’m Losing More Than I Ever Had, the best song on Primal Scream, and he turned it into something completely different, namely the song Loaded, which saved the Scream from being a footnote in music history and turned them into game changers. This is Loaded:
At first the band were less than keen with this change of direction. The idea of dancing being anathema to their indie aesthetic, but once they tasted the scene and all it had to offer they soon changed that attitude. It may be pushing a point to say that the band went from being MC5 to being The Monkees, but there is no doubt that they were the public face of the rock/dance crossover, a role they embraced with indecent enthusiasm, while Weatherall created the sounds that would not only define this record but would define the musical times.
What makes Screamadelica stand apart from those mentioned earlier is just how daring it often is. The album has become so well known now that it’s easy to forget how fresh and new it sounded. The central track is Higher Than the Sun which redefines the term bliss. It captures the  feel that would be as important as the more attention grabbing upbeat songs. Let’s not pretend that ecstasy was not important in the making and reception of this recording and Screamadelica captures the highs and, if you were lucky, mellow lows that accompanied the use of that drug. It’s an interesting point that many of the albums and movements that took music in a different direction often were fired by various substances. Revolver and Pet Sounds are linked to acid, Punk had speed, and the late 80s and early 90s saw ecstasy gain wide popularity in clubs. Of course it was not required to make music, but for a while it seemed that way. But the success of Screamadelica cannot be explained so simply, it made a difference beyond the clubs where its sound was formed. This is Higher Than the Sun:
Listening to Screamedlica 20 years on it’s surprising just how well its aged, but then a great record should remain a great record for all time, of its time yet timeless. From the opening guitar of Movin’ On Up to the gentle electronica of Shine Like Stars this is just a phenomenal piece of music. Primal Scream and Andrew Weatherall have gone on to make other great records, XTRMNTR and Sabresonic respectively, but they would never capture a moment as they did with Screamadelica. If you don’t own this album buy it, everyone else should dig it out and give it an anniversary play. It is simply magic.

Here is Shine Like Stars. It seems appropriate to end this way: