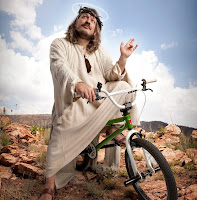 The Glasgow Comedy Festival starts on March 17. I’ll be writing a full preview of what the highlights are in the coming days, and there are plenty of them as some of my comedy heroes return to the city including Jerry Sadowitz, Bruce Morton, Mark Steel, Mark Thomas, Jeremy Hardy and Simon Munnery. Another of these is Richard Herring who will be at the Oran Mor, with his show Christ on A Bike, on March 26. I can promise you that it’s well worth seeing as I’ve already borne witness in Edinburgh last year, and I never go back for seconds unless something’s very good.
Herring’s comedy is thoughtful and filthy, just as I like it, and he challenges both his audience and himself. In the name of comedy he has taken on a personal Herculean challenge for his 2004 show The Twelve Tasks of Hercules Terrace, has grown and worn a ‘toothbrush’ moustache for last year’s superb Hitler Moustache, and in every show looks more honestly at aspects of his life than most stand ups would be comfortable with. What happens on stage is never simply a telling of jokes or anecdotes, but is concerned with questioning and challenging important ideas that surround race, religion, sex, sexism, political correctness, social expectations, and what is deemed acceptable in the name of comedy, something he obviously takes seriously.

There are those who can’t seem to get beyond what my dear Gran used to call his ‘language’ or the sexual references to listen to the content of what’s being said, but Herring couldn’t care less. If you get offended by anything then go elsewhere. Boundaries are not being pushed for the sake of offence, but to challenge the often illogical reasons that offence is sometimes taken. There are too many comedians who are willing to get the easy laughs from the ‘Live At The Apollo’ audience rather than challenge them. And some people will think that’s OK, but people need to be challenged whether they like it or not. Richard Herring, along with the other comedians I mentioned at the beginning of this piece, is not going to let people rest on their social and cultural laurels, and I find that hugely comforting. He was kind enough to answer a few questions about Christ on a Bike and about his comedy in general:


RH: Christ on a Bike was my first fully solo show, back in 2001. But I never recorded it and I also felt that nine years on I had developed as a performer. It has my favourite ever of my own routines in it and I wanted to give it another crack. I felt I had a whole new load of fans who hadn’t seen this show, and it was one that the old fans said they wanted to see again, so I thought I could kill a few birds with one stone (because I am without sin and an chuck stones) by doing it again. I am filming the DVD at the end of the run and then I can put this show to bed for good. But I have made quite a few changes and there are now 4 or 5 new routines in it. It’s cool, when you’ve been going as long as I have, to occasionally revisit something old (and hopefully give it a new twist). I also have Talking Cock: The Second Coming on the backburner, which I think I might put on in 2012, which will be the 10th anniversary of the original show.


SWH: Your previous show was ‘Hitler Moustache’. Who has been most popular when it comes to the sadly inevitable complaints about these shows? Adolf or Jesus?


RH: Though I got a few complaints about the content of Hitler Moustache (nearly always about a different thing each time) aside from a bit of a hoo haa in the Guardian before it had even started most people understood that the project was not an offensive one (though someone vandalised the poster in quite a scary way in Edinburgh). Christ on a Bike has garnered a few complaints from Christians, none of whom have seen the show (most Christians who come seem to enjoy it rather a lot – and it’s actually not that offensive towards Christ), but luckily they are all so crazy that I have been able to incorporate them into the show. In fact if I get a few more I might have enough to create a brand new show – The Third Coming? Both shows have led to veiled threats from various people, so there is a tiny danger in doing such controversial subjects, but it amuses me that nearly always the complaints come from people who haven’t seen the shows and are offended by what they imagine it will be about. So their own imaginations are actually more offensive than me. And they are getting offended by themselves.


SWH: Last year saw you publish the autobiographical ‘How Not To Grow Up’, about the year you turned 40. Having  just turned 40 myself, have I made a mistake by using it as a ‘guide’ rather than a warning? What were your reasons for writing what is often a brutally honest account of that time in your life?


RH: It is intended both as a warning and a guide. The title has two meanings after all. Hopefully if you read about the way I behaved you will not really want to emulate me (well not in all respects anyway), but I wanted to show people who freak out a bit about getting old, or who haven’t settled down that they are not alone. Increasingly I feel that an honest self-appraisal is the best route towards creating comedy that resonates. I wanted to be honest, both about the more stupid things I had done and abut my lifestyle, rather than try to paint myself in a positive light or go on about how brilliant I am. If you’re honest people tend to forgive you your foibles and like you a little bit more than someone they suspect is phoney. We’re all screw ups and we all make mistakes and probably go through periods where we are massive tools, so it’s refreshing to see someone not hiding that side of them away. I was influenced by a brilliant American writer called Jonathan Ames who is much more of a pervert than me, but who is funny and charming about his disgraceful life in his books. It was hard writing this book because I was still very close to the events it talks about and still trying to work out what had been happening to me, but the book helped me and hopefully might have something to say to people in a similar position. If you’re not in a similar position you can just laugh at me. Though I was surprised about the number of married people who seemed angry with me for living the life I did, even though I freely admit how sad I was at the time. Almost like they weren’t that happy in their own lives and felt envious of my freedom. Surely if they were happy in their marriages they would pity me, not get cross with me. I found that quite interesting.


SWH: You have a comic persona, who you sometimes describe as ‘Podcast Richard’ with reference to your weekly podcast with Andrew Collins. It appears to me that many people are unwilling to accept that there is this division between your person and the performer, much more so than is the case say with Harry Hill, Al Murray and even Pete and Dud/Derek and Clive. Is that purely because there’s no ‘costume’ involved, or do you think there’s another reason?


RH: I think it’s hard to make the distinction because there is much of the real me in all my work and even in the podcasts, so when I allow the small voice that we usually suppress to take over it isn’t always clear where one begins and another ends. And nor should it be entirely. I would hope people would realise which things I don’t mean and which I do, but I like there being a grey area in between where you’re not entirely sure (and neither am I). I am quite a dull and sensitive man in real life, with rather vanilla sexual tastes, but I don’t really care if people take the character at face value. The real life cross over in terms of the effect that the things I say have on the real Andrew Collins are part of what makes this very exciting comedy for me. It is all blurred and so genuinely a little bit dangerous. But I know where and when to allow this subconscious side of me to take the reins and it doesn’t usually stray over into my real life too much. If anything when I was younger and trying to be funny all the time, I didn’t have the balance right, but now I know the arenas where this behaviour is appropriate (or less inappropriate) and where it isn’t. But with a show like Hitler Moustache the stunt and my life became inextricably linked and I couldn’t escape the moustache because it was with me all the time. The show is as much about the ethics and repercussions of a stunt show and where the boundaries between reality and comedy lie as anything else. I do suffer for my “art”. It wasn’t the greatest of years for me having to go around everywhere with that stupid tache


SWH: Finally, are you returning to this year’s Edinburgh Fringe, and if so what will be the theme of your show?


RH: I am. It’s not 100% decided, but I think I am doing a show about love and whether it exists. Or where I attempt to destroy it. It’s provisionally entitled “What is Love, Anyway?”
I might do some kind of podcast show as well, though Andrew is not coming up this year.

Richard was also an inspiration to my starting to write this blog. He has been writing the daily Warming Up since 2002 which he began to challenge writer’s block, something I was encountering myself at the time I discovered his site. He will be appearing at Oran Mor on the 26th March as part of the Magner’s Glasgow Comedy Festival and you can buy tickets here Magners-Glasgow-International-Comedy-Festival If you would like further encouragement to see the man live here’s a clip of Christ on a Bike: