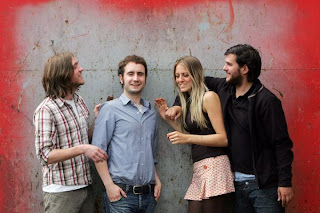 This weekend saw two of Scotland’s best headline pre-South by South West gigs in Glasgow, bands who you should already know and love; namely Popup and Kid Canaveral. Of the two Popup’s night at the 13th Note was the most interesting as it saw drummer Adi take over guitar and lead vocal duties from Damien Gilhooly. Supported by Dear Mountaineer and a top form Miss the Occupier (see Beautiful Occupation…)Popup were understandably nervous about how this shifting of line-up would be received. Well here goes.
Popup’s 2008 album A Time and A Place was as confident a début as you will find in the last 10 years, but recent live outings clearly show that in terms of their lyrics and their playing they are moving to another level. Initially it was odd to hear these familiar songs without Damien’s Glaswegian growl, but Adi’s often gentle and moving vocals gave the music a different feel that became more apparent and engaging as the set progressed, and many of the songs felt as if they had been written with her in mind, a sure sign that this move worked. Damien will return, but Popup have, perhaps by accident rather than design, changed their dynamic and I believe that this can only make them better.

Anyone who has seen Popup live will know that Damien is a tremendous frontman, one who can exude  vulnerability and the threat of violence at the same time. Think Malcolm Macdowell as Alex DeLarge in A Clockwork Orange and you’ll get an idea of his on stage presence. But bringing Adi to the front has given them previously undiscovered options and also showed Popup’s confidence in their music. This is not a band who are willing to rest on their musical laurels, or on any one style. I think they are the height of their powers and can’t wait to actually own their new material. If you don’t believe me then get yourself along to Mchuills in Glasgow this Friday (4 March) and make me right or make me wrong.

And to anyone who happens to be lucky enough to attend SXSW this year, do yourself a big favour and see Popup. Few current bands have songs like theirs. This is one of the best:

On Thursday night another Texan bound band, Kid Canaveral, held a fund-raising night at Stereo, and again it was a strong under-card. First on was ex-De Rosa man Martin John Henry, who I’ve managed to catch a few times this year already and his forthcoming album is possibly my most keenly waited release of 2011. Then came Randolph’s Leap who were new to me and immediately charmed. Any band who has an EP named Battleships and Kettle Chips has me at hello, and they’re playing The Captain’s Rest on the 31st March. I would suggest, if you’re free, you could do worse than make your way along.

But this was Kid Canaveral’s night and they knew it. Last year’s Shouting at Wildlife was one of the best albums of the year (it was number 5 in the Scottish Bams) and they are always a delight live. Theirs is a set that is devoid of filler, and they make playing together look easy, which is always a sign that a band have hit their straps. This was a celebration as well as a send off and the crowd were stamping and yelling for more in traditional Glasgow style. If I had to pick highlights they would be Smash Hits and new single You Only Went Out To Get Drunk Last Night, for which there is this rather excellent video:

SXSW kicks off in Austin on the March 15 and Scotland are going to be well represented, with Admiral Fallow, Erland and the Carnival, Errors, King Creosote, Rachel Sermanni, Twighlight Sad, Withered Hand, and many more all making the trip. You can find the full list of Scots here dearscotland.com but it’s clear that Texas is in for a treat. Also appearing is the legend that is Edwyn Collins, a man I would happily listen to every night of my life. This is Do It Again, and  Edwyn boasts quite the backing band: