This month’s Indelible Ink column is now available for reading and commentary over at Dear Scotland and this month the featured novel is James Robertson’s The Fanatic. Taking inspiration from James Hogg’s The Private Memoirs and Confessions of a Justified Sinner as well as Robert Louis Stevenson’s Strange Case of Dr Jekyll and Mr Hyde, Robertson’s novel is appropriately split in two.
There are two stories told in The Fanatic, one in 1997 Edinburgh, the other in 1677. The contemporary tale concerns Andrew Carlin, a strange character who is deemed perfect for the role as guide on a ‘Haunted Edinburgh’ tour. During research for the role he uncovers a ‘lost’ memoir of covenanter and apparent Satanist James Mitchel with whom he becomes obsessed. Mitchel’s story makes up the 1677 parts of the book and Robertson moves easily between the centuries.
The Fanatic is two thrillers for the price of one, but the stories are intrinsically linked. Like the novels that influenced it, Robertson’s book can be read either as a supernatural text or a psychological one (or even something in-between). Both central characters of Carlin and Mitchel are fascinating creations and they raise The Fanatic from merely good to borderline excellent. Robertson is one of the best at work today, and if you’ve never read him this is a great place to start. 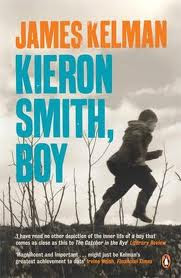 Next month’s novel: Most of the novels dealt with in Indelible Ink have been debuts, but next month’s title is the most recent James Kelman novel Kieron Smith, boy and I’ve chosen it because I think it may just be his best. After moving out of Glasgow for his previous two novels Translated Accounts and You Have to Be Careful in the Land of the Free, Kelman returns not only to his home town but to his own childhood. Kieron Smith, boy views Glasgow life through the eyes of young Kieron, and Kelman uses this childlike perspective to comment on familiar topics such as class, education and religion with a freshness that many readers would have doubted possible. Comparisons have been made with Roddy Doyle’s Paddy Clarke, Ha, Ha, Ha but Kelman’s is the superior novel.

Kelman is one of those writers that splits the critics into a love/hate divide. He is seen as a ‘difficult’ writer, but, on the whole, I find that an unjust summation. However, his reputation precedes him and I think it puts a lot of people off reading him. What he does do is to capture the way people speak, and think, better than almost any Scottish writer around, and he understands the political importance of language, how we use it and how it is used by others to repress.

I have a copy of February’s novel The Sound of My Voice to give away. I think the easiest way of choosing who to give it to would be to use my Facebook follower indicator as a sort of randomiser. If you want to be included in this draw then head on over to Scots Whay Hae’s Facebook home and click ‘Like’ (if you haven’t already). On the 1st of December at 5pm (Glasgow time) I’ll click refresh on the page and the first person that appears in the top left of my followers will win the book.