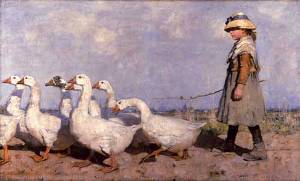 I’m aware that those of you overseas have problems accessing BBC’s iplayer, but hopefully BBC Scotland’s The Glasgow Boys, shown on BBC2 in Scotland last night, will find its way to you sometime soon as it is exactly the kind of programme that the BBC should be making. I previewed The Glasgow Boys exhibition at the Kelvingrove Art Gallery before (see The Boys are Back in Town… which contains lots of examples of their work) and The Glasgow Boys worked perfectly as an accompanying piece to the exhibition. BBC Scotland is making a happy habit of producing joined up programming. The recent Burns anniversary was well served by the corporation, and the interactive relationship between TV, radio and internet was again in evidence during the History of Scotland series.
The Glasgow Boys was presented by ex-Glasgow School of Art alumni Muriel Gray. Muriel is a woman who splits opinion in not so much a love/hate divide, more a like/hate divide. Despite disagreeing with a lot of the stuff she writes in The Sunday Herald I’m very fond of Muriel. This is down to her sterling work on The Tube, where she was a refreshing counterpoint to Paula Yates woman-child act, and a long forgotten programme called Walkie-Talkie, which was so simple in its premise (well known Scots such as John Byrne walked their favourite walks while talking to Muriel) that it was genius. I also have a soft spot for her Munro bagging series The Munro Show.
The Glasgow Boys was another example of her excellent and always informed presenting style, and it did make make me wonder why she isn’t on our screens more often. But then I repeat, I like her. I have been told by those who don’t that they find watching her like the equivalent of chewing cotton wool. The programme itself gave an excellent insight into ‘The Boys’ and their work. Concentrating on John Lavery, Edward Hornell, George Henry, Edward Walton and James Guthrie as well as their ‘mentor’ WY Macgregor, they were portrayed as a romantic bunch who genuinely helped each other to improve their work. As someone who only knew the paintings it was fascinating to learn of the stories that lay behind them, and Gray was informative and unassuming as she guided us through the lads and the landscape.
If you can access iplayer then you’ll find The Glasgow Boys here for at least the next week. If not I can only try and make amends by including this clip of the lovely Muriel at work half way up a mountain, and which also features a cameo by the late, great, poet Sorley Maclean. Those of an anti-Muriel disposition, look away know: