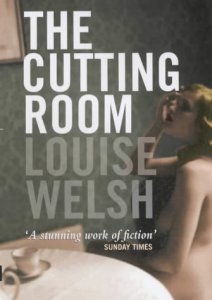 There’s a new Indelible Ink column over at Dear Scotland
(find it @dearscotland.com/indelible-ink-the-cutting-room/)
which this month looks at Louise Welsh’s debut novel The Cutting Room. After James Kelman’s apparent attack on genre fiction last year (see Kelman v’s Jakey & Kelman v’s Jakey: The Aftermath) The Cutting Room reminds us that genre can be so much more than the sum of its parts, and no Scottish writer puts those parts together with the flourish that Welsh does.
This novel is steeped in the genre of noir, and Welsh shows a real knowledge of ‘hardboiled’ detective fiction, particularly with reference to the central character of Rilke. The writing is dark, dirty, dangerous and erotic with a Gothic sensibility that excites and unsettles. Welsh manages to create real tension throughout, and with Rilke Welsh has created one of Scottish literature’s most memorable men.
Louise Welsh is building a very impressive body of work. The novella Tamburlaine Must Die and her third book The Bullet Trick, while perhaps not as arresting as her debut, are still excellent reads. Her latest is Naming the Bones which has had strong reviews, but I have yet to read. When I do you’ll be the first to know.
Next month’s Indelible Ink will look at one of Scotland’s cult novels, and most over looked writers. I’m referring to Gordon Legge and his 1989 novel The Shoe. Many writers attempt to convey the dynamic between a group of friends, and deal with the culture that shapes their lives, but few have done so as successfully as Legge does in this novel.