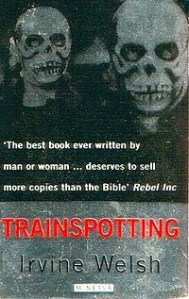 The latest Dear Scotland column, (out today and to be found @dearscotland.com/indelible-ink-trainspotting/ ), looks at the impact and legacy of Irvine Welsh’s Trainspotting. The success of the industry that came to surround the tale of Renton and his chums; the film, poster, soundtrack(s), t-shirt and subsequent careers of those involved, have come to overshadow the original text and the column reminds us why this is one of the most important Scottish novels.
It is more complex and arresting than the film could hope to be, and if you have never read it, or haven’t for some time, then I recommend you reacquaint yourself with the inhabitants of Welsh’s world, especially those the film left behind. Some of the funniest scenes involve Rab ‘Second Prize’ McLaughlin, and some of the most heart-breaking events happen to the tragic Dave Mitchell. Even those well kent faces Renton, Begbie, Spud and Sick Boy are given more character than the film allows. Don’t misunderstand me, I think it’s a good film, but it would be impossible to match what the novel achieves.
This also applies to missing scenes that are central to the characterisation of the individuals involved. We have a better understanding of Franco Begbie’s ‘nutter’ persona when we meet his alcoholic down and out dad in ‘Trainspotting at Leith Central Station’, and Renton’s ‘heroic’ status is challenged further than it ever is on screen, particularly in the chapter ‘Bang to Rites’.
It may be a terrible cliche, but this book is not only better, but braver than a film version could ever be. It’s also great fun to read as Welsh’s language is his real triumph.
Next month’s column will look at Louise Welsh’s The Cutting Room. If you’ve read it you know what a good book it is, if you haven’t you should give it a go. You won’t be disappointed.
The next 5 novels under discussion are:
Louise Welsh The Cutting Room (May)
Gordon Legge The Shoe (Jun)
Alan Bissett Boyracers (Jul)
Iain Banks The Wasp Factory (Aug)
Anne Donovan Buddha Da (Sept)