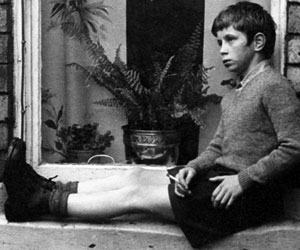 For anyone interested in film a must see is the Bill Douglas trilogy of films which were released for the first time by the BFI on DVD last year. The trilogy comprises of My Childhood (1972), My Ain Folk (1973) and My Way Home (1978) and the three films combine to create some of the most moving and humane cinema you are ever likely to encounter.

The films are founded upon personal recollections of the young Douglas’s life, at first growing up in Newcraighall, a mining village near Edinburgh, in the 1930’s and 40’s, then life in an Edinburgh children’s home and finishing with a stint in the army. The poverty and bleakness of his early life are shocking, but it is the use of black and white film, and the courageous choice to have minimal dialogue, that make these films so unforgettable. What could have become mawkish and sentimental remains poignant, moving and strangely beautiful.

The films are unlike other British cinema from the time, and Douglas appears to be influenced by European directors, particularly Ingmar Bergman, and in turn may have been an influence on Ken Loach, and particularly Terence Davies. Using naturalistic acting and forcing the audience to linger on the characters on screen Douglas shows a life and allows the audience to discover their own feelings in their own time rather than have them pulled into shape by overbearing dialogue or grandstanding dramatic statements.

This excellent essay on the trilogy by filmmaker Rhys Graham (http://tinyurl.com/y9c98zj) should whet your appetite more than my brief appraisal; it’s worth checking out. Below is a clip from the end of My Way Home. It’s not particularly typical of the rest of the trilogy, and in a sense I should give a *spoiler alert* as it does give a glimpse of what may be to come, if not what has gone before, but it allows you to get a feel of the style and beauty of Douglas’s vision:

Douglas went on to direct one more film, 1986’s Comrades, which had an eclectic, if slightly odd, cast including Keith Allen, James Fox, Vanessa Redgrave, Barbara Windsor(!!) and, playing 14 different parts, Alex Norton. Again the comparisons with Bergman, or in this case Fellini, particularly Amacord, are relevant . How rare to have a film director whose vision seemed to be unaffected by commercial concern, and how typical that the result of this is that all we have of his artistic vision is his trilogy of childhood films and Comrades. Below is an odd clip from a documentary about Bill Douglas, the making of Comrades, and his love obsessive of cinema:

Apparently Douglas had been working on a screen play of James Hogg’s classic 1824 novel The Private Memoirs and Confessions of a Justified Sinner, something which I would have loved to have seen. There are always rumours that someone is going to make a film adaptation of this incredible novel, but has yet to happen. Bill Douglas died too young at the age of 54.

Leave a Reply to AliB1970Cancel Reply